Social determinants of health are the social and economic factors that contribute to our state of health and wellbeing, such as:
how much money we earn
what level of education we have
where we live and whether we have access to transport
our ethnicity.
Addressing these drivers of health is challenging, says Associate Professor Lyndall Strazdins, senior fellow at the National Centre for Epidemiology and Population Health, at the Australian National University.
“Once you move beyond giving people flu shots and that sort thing, then what is it that you have to engage with?” says Strazdins.
“That’s what makes social determinants of health such a difficult policy field because it steps out of what’s considered to be health, which is health care, and moves into the drivers of health, the systems that will move health up or down in a society.”
This means just about any policy or law is likely to have an impact on health; whether it’s paid parental leave, minimum wage, working hours, education, etc. Recognition of this has given rise to a global movement for ‘health in all policies’.
Strazdins says the movement emphasises the importance of policy-makers taking health into account.
One example is the knock-on health impacts of workforce participation policies. Policies that push back the retirement age and keep us in the workforce for longer, reduce the amount of time we have for leisure activity and exercise as we age. As well, some of us are going to be caring for our partners. All this means we’re less able to give any emerging health issues the attention they may need.
Despite this, health is rarely even mentioned in such policies, Strazdins says. 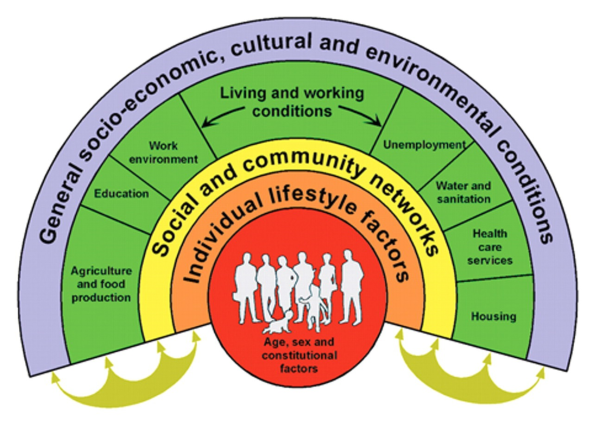 “The next challenge is nationally, for all Australians, the Australian Government adopting the WHO framework to drive improvements across communities and populations, remote and metropolitan, but I  acknowledge it’s not a politically attractive target.

“Action on social determinants requires long-term commitment that goes beyond the three-year cycles of elected governments.”

Martin Laverty, the chairman of the Social Determinants of Health Alliance

‘An ounce of prevention is worth a pound of cure’, Benjamin Franklin is quoted as saying.

But as bang-for-your-buck as prevention may be when it comes to your health, adopting a healthy lifestyle is not as simple as it may sound.